We are here to inspire! 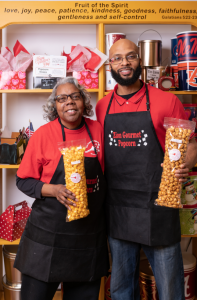 In 2011, The Most High gave her the vision to start her own popcorn shop. About the same time, a gourmet popcorn shop opened in Huntsville, so Polk and her husband decided to wait on opening their own shop to support the new venture in Huntsville.

When the idea for opening a shop began weighing heavily on Polk’s mind again – so much so that she said she didn’t sleep for months – Polk’s mother promised to help her bag the popcorn if Polk would take the leap of faith. Before following through on her offer, Polk’s mother passed away, but Polk was determined to press on with her dream.

From August 2015 to January 2016, Polk began selling her popcorn at the Limestone Flea Market. She named her business after one of her granddaughters, Zion. She was also inspired by the hymn, “We’re Marching to Zion.”

Polk later operated out of a trailer her son found on a road near Harvest. The owner agreed to paint it and sell it to her. Polk cleaned the trailer, parked it in Harvest and began selling her goods from there.

Handmade By One of the Best

All of the confections are made in-house with all-natural ingredients. “We use real natural butter, brown sugar and other natural ingredients in the making of our caramel popcorn,” Polk said. “Our cheese popcorn is made with real cheese.” The caramel popcorn is Polk’s original recipe. She invented her other treats from recipes she has collected and tweaked over the years, as her love of gourmet popcorn began years ago.

But the fruit of the Spirit is love, joy, peace, patience, kindness, goodness, faithfulness, gentleness, self-control; against such there is no law.